Social networks like Facebook and Google+ are suddenly more image-happy than ever. And that’s awesome, in theory. But images ≠ photos. And that’s an important distinction.

According to Facebook, today the News Feed is comprised of about 50% “visual content.” What began as a spartan little text entry box is now a full-fledged multimedia monster, for better or worse. But the advent of Facebook’s new “bright beautiful stories” may just mean more visual detritus to brush away from the content we really want to see, assuming it’s out there at all.

Trying to get a screen capture of the new News Feed Photos page earlier today, I had to refresh about ten times before anything worthy of being highlighted bubbled up. But even then, the rest of the stuff on the page was such an eyesore, I just went with the Facebook PR team’s stock shot. My Photos tab (and the News Feed at large) remains a confusing mixture of Someecards and random images that people scoop up from around the Web and don’t attribute. 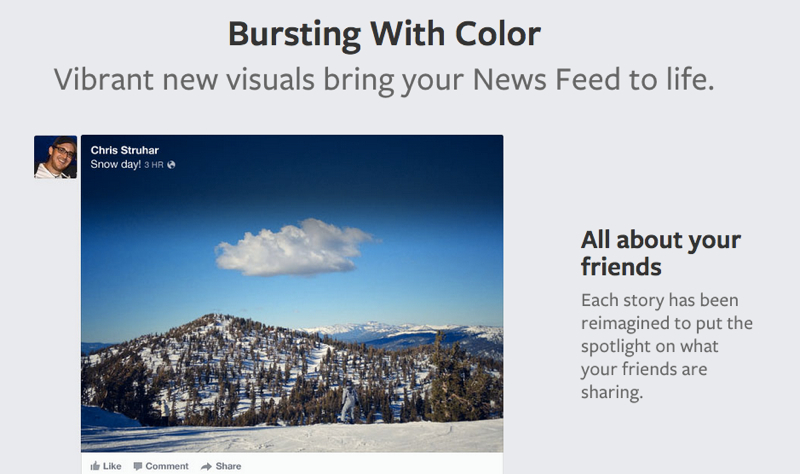 It’s just that in the example images, everything just looks so good. I mean, if all of my friends posted only high-res pictures of their amazing blue-skied skiing adventures, I wouldn’t be complaining.

The Memes Come Marching In 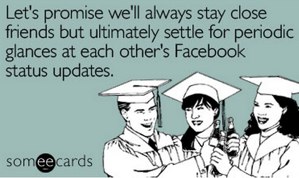 The invasion of the meme might be partly to blame. I remember when memes hit Tumblr and then took off. I’d been blogging there since 2009. Back then I’d post original photos and original writing and the people I followed did the same. Then suddenly, one day it just flipped – Tumblr became a place for recycling jokes and reposting lolcats. I lost interest in it immediately and haven’t really blogged there since. Now that Facebook is dominated by image updates, the News Feed is a morass of recycled content – and again, I’m losing interest.

Facebook may own Instagram, but the social photo sharing network has its own set of rules – many of them unspoken, selfies aside. Instagram made generating original content fun again. Sure, we’re just taking little snapshots and posting them in quasi-realtime, but that’s a hell of a lot more interesting than a retweet or a video gone viral. If anyone on my Instagram posts a screencap or a picture lifted from a different source, I unfollow them. Instagram is retraining people to populate and curate their own little photo portals – and even first-time photographers start developing their own visual voice. It’s no surprise that the most interesting images in my News Feed are all imported from Instagram.

(See also #Me: Instagram Narcissism And The Scourge Of The Selfie.)

Call me old fashioned. I like actual photos. I like text, too. I prefer user-generated content over clever Web-recycling. Remember when people used to blog? Now most of us just move content from one place to another. I don’t watch video content on the Web unless I’m absolutely convinced it will be worth my time – and if I have to sit through an auto-play YouTube ad first, forget it.

Chris Cox, Facebook’s VP of Product, summed it up this at Facebook’s big announcement Thursday morning: “Fundamentally we’re a container for content other people create.” But most Facebook users don’t create content, they just borrow it from someone else who probably borrowed it from someone else after it made the rounds on Tumblr a few months ago.

Maybe I’m just cynical. Or maybe there really is nothing new under the sun. But if you ask me, Facebook needs more content creators – and fewer diligent meme mules ferrying viral junk from point A to point B with their heads down.